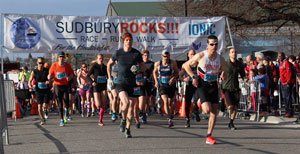 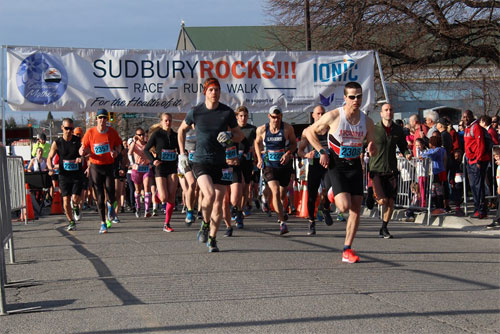 This afternoon with the wind at their backs, some 2,000 Sudburians of all fitness levels took their place on the starting line in front of Memorial Park downtown for the 14th annual SudburyROCKS!! Race, Run, Walk For The Health Of It.

Since growing from SudburyROCKS!! running club in 2005, the annual race has become the largest competitive running event in Northern Ontario, attracting crowds of competitive athletes and amateurs alike.

In its 14 years, SudburyROCKS!! has raised more than $600,000 for various community charities through pledges and donations. This year’s recipients being the Northern Cancer Foundation and Health Sciences North.

“We really wanted a local charity where our money is staying absolutely local,” said SudburyROCKS!! promotions director Vince Perdue. “We have one of the best cancer centres probably in Ontario, possibly in Canada, and we’re helping to support that now.”

The locality of the beneficiary appeared to bring quite a few new athletes to the starting line this year. Among them, 92.7 ROCK radio host Greg Williams, zipped head to toe in a Deadpool costume — which yes, he ran in.

“When I heard that the beneficiary of Sudbury ROCKS this year was the Northern Cancer Foundation and Health Sciences North, I just said well, if there was ever a time to get involved in it, this is the year,” said Williams.

Motivated by his mother’s cancer diagnosis in September of last year, Williams challenged the community to help him raise $1,000 in pledges, for which he agreed to run the race in a tight, lycra costume. In addition to this, Williams asked listeners to pledge $1 for every 15 seconds under 25 minutes that he was able to beat the clock.

Finishing first in the Vale Celebrity Challenge Run with an unofficial time of 21:12, Williams was able to raise approximately $1,250 in pledges.

Deadpool, or rather his secret identity Wade Wilson, has cancer, said Williams. But because of his regenerative superpowers, it’s there, but always healing. “(I thought) who better to run in a race for the Northern Cancer Foundation than the ‘merc with the mouth’ (a popular nickname for Deadpool in the comic books and among fans), who has cancer,” said Williams.

In addition to being a major fundraiser for the community, SudburyROCKS!! is also a Boston Marathon qualifier, an incredible opportunity for Northern Ontario athletes to test their skills against some of the best. Perdue said that of the crowd of 2,000, approximately 40-50 athletes are running with the goal of qualifying for the Boston Marathon, adding that he’s pretty confident many will reach that goal.