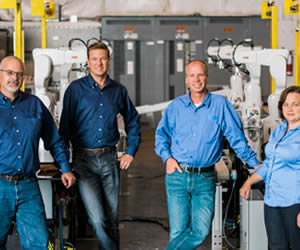 Fifteen years ago, Ionic Mechatronics set out to provide the best innovative solutions to problems faced by industry. Now, the company has expanded to three locations in Ontario, employing 70 people and generating tens of millions in annual revenue.

Originally founded by Steve Matusch, the Ionic Group of Companies is comprised of five divisions: Ionic Mechatronics Ltd. in Sudbury, Ionic Automation in Cambridge, Variant Mining Technologies in Chelmsford, Blackrock Engineering in Sudbury and, the most recent addition, Ionic Technologias in Santiago. To parallel the consistent growth of the company, the ownership has expanded to include key employees who have contributed significantly to Ionic’s success. Today, the ownership group also includes Christina Visser, Paul Chamberland and Eric Haapamaki.

The divisions provide various engineering services for clients in the metals processing, mining and mineral processing, oil and gas, pulp and paper, and automotive industries.

Since designing its first transfer car for Inco’s copper refinery (now Vale), Ionic has used its experience to win contracts for larger and more complex projects. It prides itself on growing its reputation as an inventive, creative and cost-effective engineer, manufacturer and integrator of industrial controls, automated machinery and robotic systems.

Ionic’s innovations have changed the game for players in heavy industry, and many of the company’s creations have translated into repeat projects.

An early example, the development of a better mine chute, resulted in a joint venture with Carriere Industrial Service (CIS). This joint venture, now known as Variant Mining Technologies markets, designs and builds the chutes as well as other material-handling products.

In 2003, Ionic built its first Kidd process copper stripping system, the first stripping machine in the world to incorporate robotics. Since that time Ionic has built multiple stripping systems and is currently in negotiations to build more.

The company has developed a number of other repeat products, all the while adapting as it grew from a small, local business to one of international stature.

Relationships are important to Ionic, and it maintains partnerships with a number of other companies.

“We have a wide range of skills and abilities,” says Steve Matusch, Ionic’s president. “But we realized very early on and that the key to growth was to develop strategic partnerships with complementary firms.”

That openness to collaboration is acknowledged by Ionic’s partners.

Ionic has been repeatedly recognized for its role in the Northern business landscape. It was a previous Northern Ontario Business Award winner, for innovation, in 2003. Steve Matusch and André Dumais earned a 40 under Forty award, also from Northern Ontario Business, in 2006. Matusch has been recognized with an alumni achievement award from the University of Waterloo, and an entrepreneurship medal from Professional Engineers Ontario. Ionic’s consulting engineering manager Christina Visser was named a Woman of Distinction in 2015.