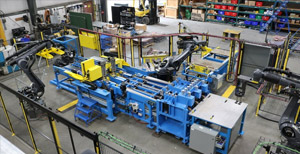 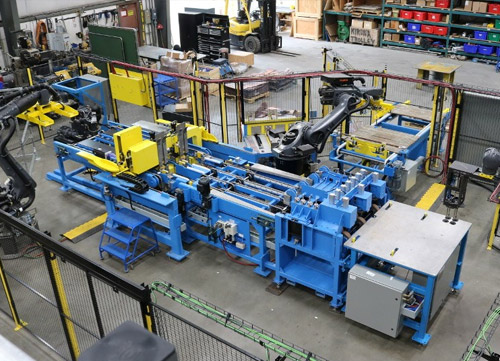 Ionic Mechatronics in Sudbury is infusing an old copper-refining technology with new life, increasing safety and efficiency in the process.

Later this month, the firm will roll out an automated copper starter sheet machine that uses robotics in the transfer of all copper material, which the company says is the first of its kind in the world.

Copper starter sheet machines aren’t new. Built in the 1980s and 1990s, the technology has been used in the purification of copper for decades. But past iterations have relied on a combination of labour and hydraulics to get the job done.

“The ones we’ve been able to develop now are really removing the people from doing the dangerous work.”

Copper starter sheet machines use a sheet of copper dipped in a chemical bath to “start” the process of electrolysis, which purifies the metal.

When the operation is complete, the resulting copper sheets are removed and the process is repeated.

Over the years, as companies started to migrate their systems over to newer technology, copper starter sheet machines fell somewhat out of favour, Catton said.

But the machines were so well built, they last for decades before needing to be replaced, and so many companies still use them.

“The company that used to do them got bought out by another company, so there are not very many people that do these,” Catton said.

“A new starter sheet machine hasn’t really been built in years, because these are such rugged and robust machines.”

But now, as the equipment starts to show its age, Catton said many companies believe the only option is to completely overhaul their existing setup.

Ionic’s solution allows them to either retrofit existing machinery or build something completely new.

“We looked at the need and we’ve come up with a totally new design for the same process, but using robotics and, really, just putting copper sheets on one side and you’re getting your finished product out the other side.”

It helps make the job safer by removing employees from that part of the operation, reducing their exposure to toxic substances and gases, while also lowering the risk of musculoskeletal injuries, he added.

The addition of robotics also increases an operation’s efficiency and reduces downtime.

After a year in development, the first of these new machines will be ready to be sent to a customer in Arizona, at the heart of the U.S. copper belt, by mid-August.

Ionic has also received interest in the technology from a company in Poland, along with distributors in South Africa and India.

“We’re also looking at a similar application for a different metal for a starter sheet machine,” Catton said. “We’re going to be able to take the same technology and apply it not only to copper, but to other metals.”

This flurry of activity comes as Ionic embarks on an in-house construction project to double the size of its 12,000-square-foot shop in the Sudbury bedroom community of Lively, which will give staff more room to work.

As COVID-19 makes its way around the globe, many operations have stalled, but Catton said Ionic has remained busy over the last several months.

Many larger projects have been shelved as companies trim their capital budgets, but a steady stream of smaller jobs has kept staff working and the shop humming.

“They’re not these million-dollar machines, but being able to do these smaller automation studies or small automation projects has definitely helped out and have kept us busy throughout,” Catton said. “It’s been good.”

“We can look at automation and then we can look at how to repurpose the individuals and put them into some tasks where we don’t feel like they would be at any risk of any kind of pandemic or disease, or COVID, or whatever it is at that point.”

Article by: Sudbury.com – By: Lindsay Kelly